GRAVE LINES - "Fed Into The Nihilist Engine" Album OUT NOW, Plus Launch Show

The new album from London doom crooners GRAVE LINES titled "FED INTO THE NIHILIST ENGINE" is out now on New Heavy Sounds Records, and can be purchased via Cargo Records UK. The quartet will also being playing the new album in it's entirety at a launch show at Corsica Studios, London on Saturday 12th May (7-10pm). 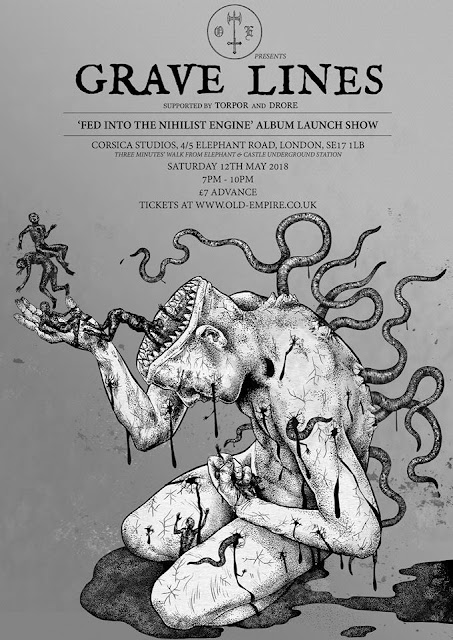 The full lineup for this year's Desertfest London is now here. It's a beastly melee of some of the greatest bands out there. As usual for the HDP/WPC Stage we've selected a handful of the heaviest sounds to rumble through the Underworld, this year on the Sunday, 6th May.
Full lineup and extra stages below, tickets on sale now and shifting FAST!!! Don't delay.. 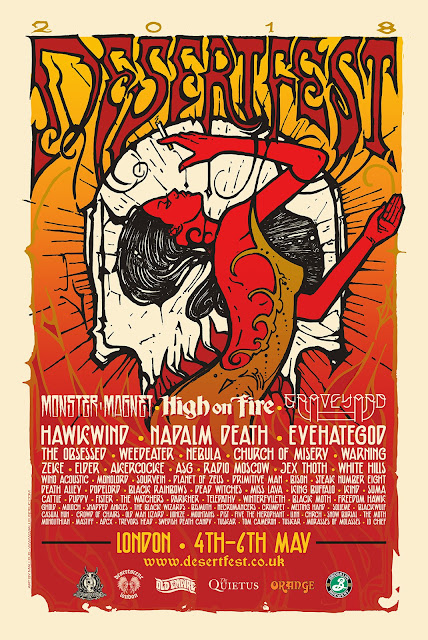 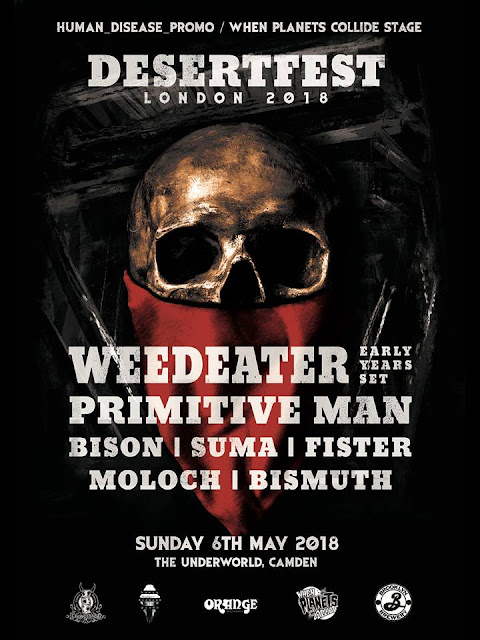 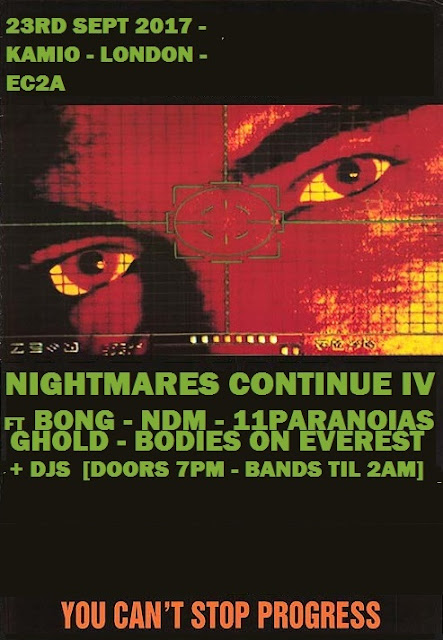 The Human_Disease_Promo / When Planets Collide Stage is set to bring an expanse of heaviness together under one roof at Desertfest London 2017 once again.

This year we have chosen to embrace our love for all aspects of everything across the heavy spectrum by bringing a killer range of bands to the HDP/WPC stage. Topping of the day we're thrilled to be hosting the might of heavy weed riff legends BONGZILLA as they hit the underworld for a special set of early tracks (focusing on the releases Stash / Apogee / Methods For Attaining High Altitudes), before they head over to the Roundhouse the following day for a set of tracks spanning their entire 20+ years. These will be their first shows in the capital in nearly 14 years, so it promises to something damn special!

As already announced the new England masters of bruise groove SCISSORFIGHT are back in action with a new lineup and new material, and they’ll be with us to shake the underworld apart with their signature neck-wrenching riffs too. Joining the proceedings we’re stoked to also have the mind-altering blackened sludge/doom of Richmond Virginia's INTER ARMA with us. Hopping across the channel CELESTE will be bringing a dark post metal harshness from Lyon, France to also add to the mele. All the way from San Francisco, doom crooners BRUME will make an appearance as their debut London show with a slew of seductive low-end riff magic. Completing the bill, openers MONOLITHIAN travel up from the west country to prove that the UK underground takes no prisoners when it comes to gnarly giant sounds with their destructive and filthy two-piece death-sludge mayhem.

All said it should prove to be a day of wickedly heavy proportions, so get ready to pack 'em full and pack tight into the dark depths of the festival as the Camden Underworld is assaulted by the HDP/WPC stage at Desertfest once again in 2017. 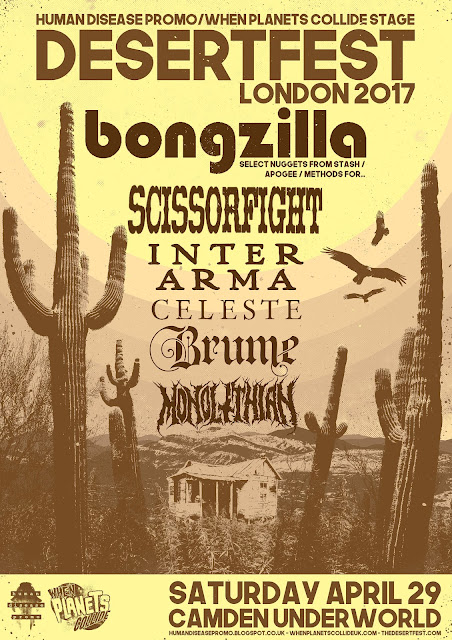 New England bruisers SCISSORFIGHT are the first band to be announced for the Human_Disease_Promo / WhenPlanetsCollide Stage at DesertFest London 2017. We're stoked that the heavy groove aficionados are back and even happier to be bringing them back to The Underworld in April. Stay tuned for more news very soon as to who will be joining them. You can read the writeup here: http://www.desertfest.co.uk/scissorfight 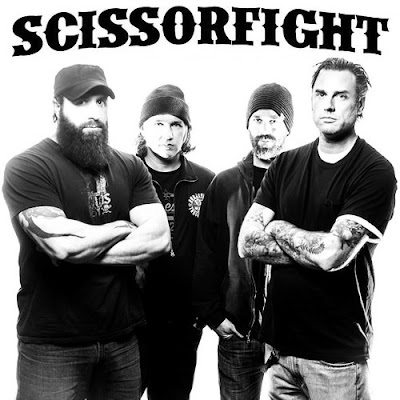 The lineup for the fest as a whole has increased 10 fold too, with the additions of riff maestros SLEEP, the return of stoner legends SLO BURN, trad doom metal mainstays CANDLEMASS and many many more besides, including UK talent in the form of London's GRAVE LINES and Liverpudlian reprobates IRON WITCH amongst others. Check out the lineup so far below. With more still to announce too it'd be wise to grab you tickets before you miss the chance! Ticket link via the festival website, here - http://www.desertfest.co.uk :

GRAVE LINES the new band ft members of Dead Existence / Casual Nun / Sea Bastard / Dysteria / War Wolf / Landskap / Jovian have a run of upcoming shows. You can catch them at :


You can stream / download the new album "Welcome To Nothing" from their bandcamp here:
https://gravelinesuk.bandcamp.com/


and buy the CD version plus merch via Black Reaper Records, from here:
http://blackreaperrecords.bigcartel.com/ 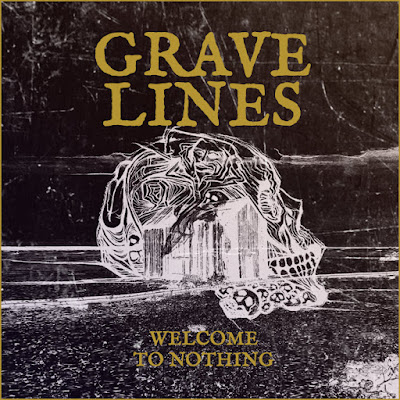 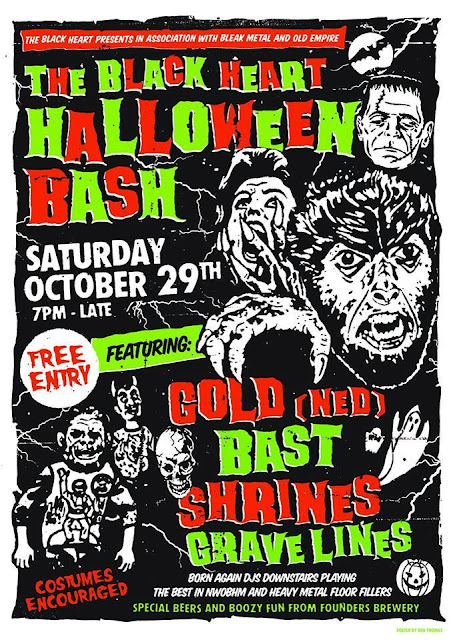 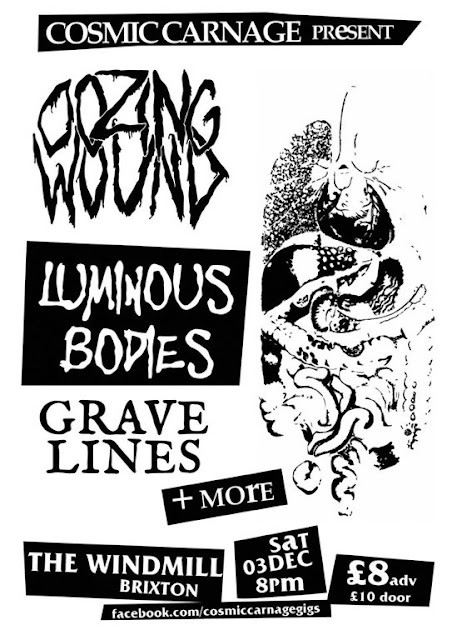 The first set of bands for DesertFest 2017 here in olde London town have been announced. They come in the shape of Norway's Jugend maestros, the mighty TURBONEGRO, plus also the first trip to these shores for Sweden's soaring  psyche masters YURI GAGARIN. Also added are SAMSARA BLUES EXPERIMENT, ELEPHANT TREE, VODUN, SATAN's SATYRS, THE PICTURE BOOKS and MAMMOTH STORM.


Stay tuned for many more announcements incuding news for the human_disease_promo / whenplanets collide stage for 2107 too!